This site is intended for healthcare professionals

Return to play after concussion

What should players do to return to play (RTP)

The routine return to play pathway is shown in the diagram below: 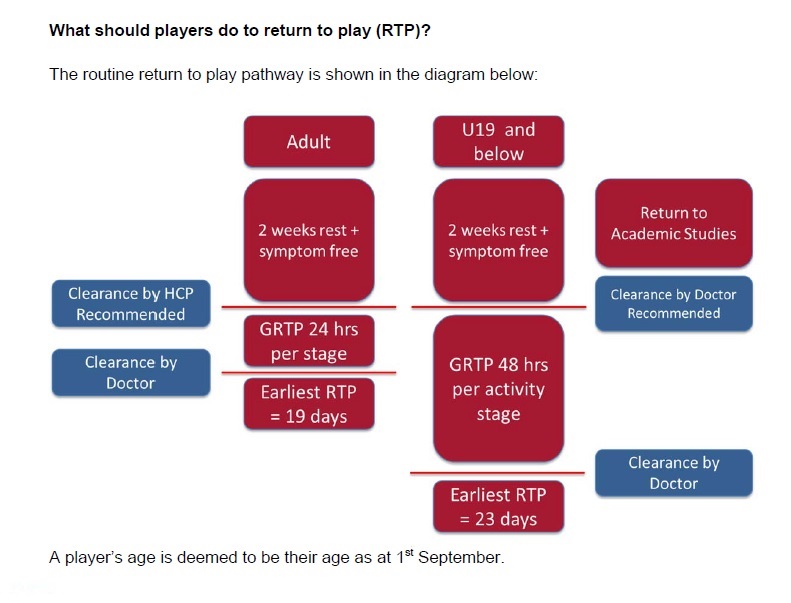 The GRTP should be undertaken on a case by case basis and with the full cooperation of the player and their parents/guardians. Where a club/school has their own medical resources the GRTP process should be carried out by the club/school coach, and overseen by the club/school health care professional/doctor. Parents should where possible also be actively involved in the process.

Before a player can commence the exercise elements of the GRTP i.e. Stage 2, they must be symptom free for a period of 24 hours (adult) or 48 hours (U19) (This is Level 1)

On completion of Level 4 the player may resume full contact practice (Level 5) with Medical Practitioner clearance.

Schools and clubs are advised to keep a record of the player's or parent's confirmation that clearance has been obtained and a doctor's letter is not necessarily required. On completion of Level 5 without the presence of symptoms, the player may return to playing in full contact rugby games (Level 6).

Add your personal annotation to this page:
-return to play following concussion (summary of guidance relating specifically to rugby)

Add your personal annotation to this page:
-return to play following concussion (summary of guidance relating specifically to rugby)

Add your reflection on what you learned from this page and how it relates to your practice:
-return to play following concussion (summary of guidance relating specifically to rugby)

Please let us know your feedback regarding the page:
-return to play following concussion (summary of guidance relating specifically to rugby)