In the Women's Health Initiative study there was a relative risk of 1.26 at 5.2 years of developing breast cancer (comparing oestrogen plus progestogen arm vs. placebo group) (1) - this meant an increased absolute risk of 8 per 10,000 women per year.

The Million Women Study (2) was set up to investigate the effects of specific types of HRT on incident and fatal breast cancer.Over one million UK women (1 084 110) aged 50-64 years were recruited into the Million Women Study between 1996 and 2001, provided information about their use of HRT and other personal details, and were followed up for cancer incidence and death. Results showed that:

A study of over 100,000 women diagnosed with breast cancer in relation to type and timing of menopausal hormone therapy and breast cancer risk was published in August 2019 (3). Based on this the MRHA has stated (4) :

in the UK about 1 in 16 women who never use HRT are diagnosed with breast cancer between the ages of 50 and 69 years. This is equal to 63 cases of breast cancer per 1000 women. Over the same period (ages 50-69 years), with 5 years of HRT use, the study estimated:

These risks are for 5 years of HRT use. The numbers of extra cases of breast cancer above would approximately double if HRT was used for 10 years instead of 5.

With respect to age of onset of use and HRT (4):

The MHRA has summarised the risks of HRT with respect to breast, endometrial and ovarian cancer (4):

Summary of HRT risks and benefits* during current use and current use plus post-treatment from age of menopause up to age 69 years, per 1000 women with 5 years or 10 years use of HRT (4) 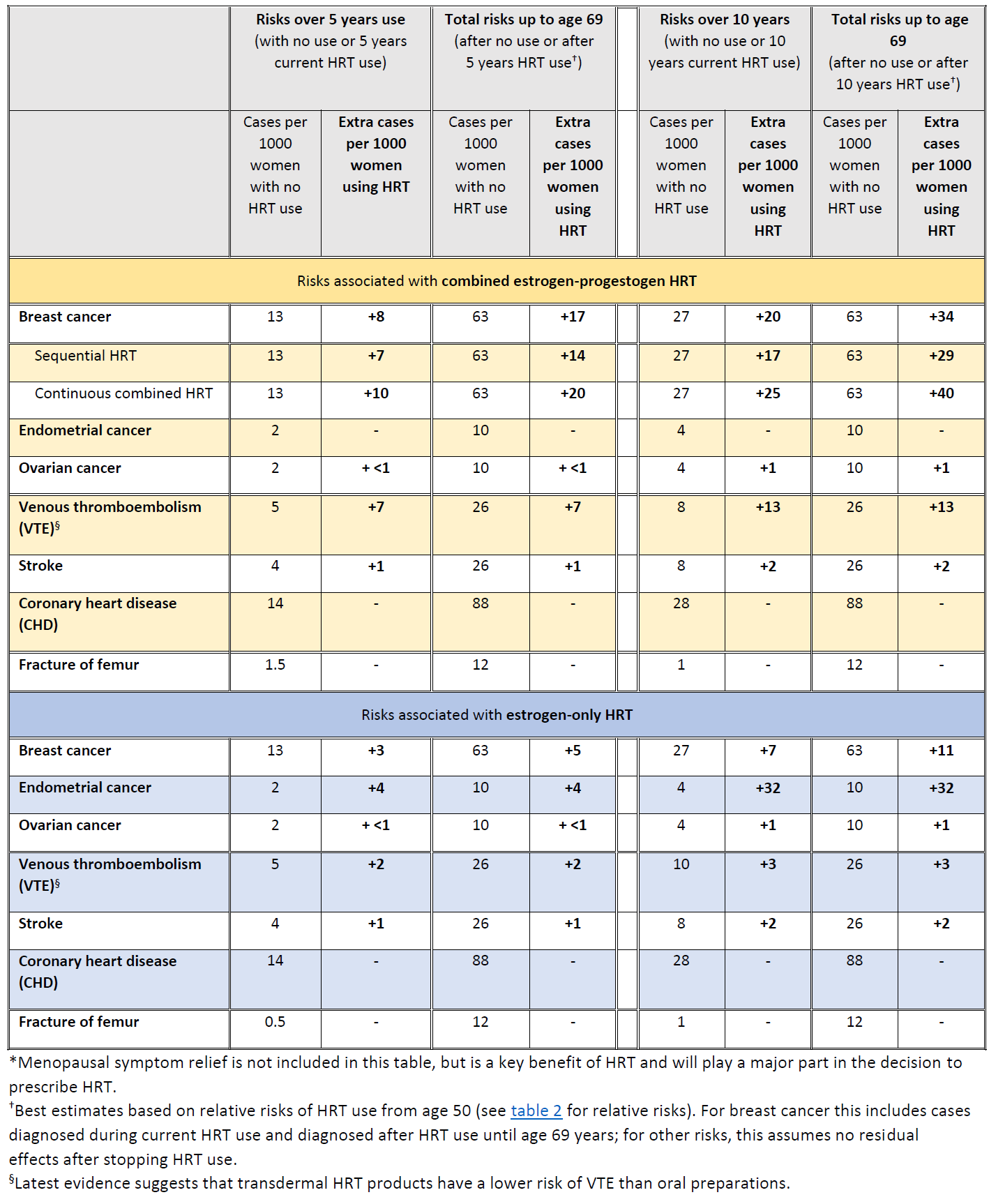 The British Menopause Society (BMS), International Menopause Society (IMS), European Menopause and Andropause Society (EMAS), Royal College of Obstetricians and Gynaecologists (RCOG) and Australasian Menopause Society (AMS) have issued clarification of the evidence on the risk of breast cancer with menopausal hormone therapy (MHT) in response to the recommendations of the European Medicines Agency (EMA) - the central European drug regulatory body - Pharmacovigilance Risk Assessment Committee on 11-14 May 2020 that followed on from a meta-analysis by the Collaborative Group on Hormonal Factors in Breast Cancer (CGHFBC) published in the Lancet on 30 August 2019.

This advice is summarised below (5):

There are a number of limitations in the methodology of the CGHFBC meta-analysis that need to be considered when interpreting the data. These include the following (5):

"We believe that the findings from the CGHFBC meta-analysis should be explained to women when discussing the benefits and risks of MHT. However, discussions on the risk of breast cancer with MHT should also include the findings from the WHI placebo-controlled randomized trials and the large E3N observational studies, which reported on the risk of breast cancer risk in users of micronized progesterone and dydrogesterone compared with other progestogens. Neither of the latter two studies was included in the CGHFBC meta-analysis. (5)"

Add your personal annotation to this page:
-breast cancer and HRT

Edit your personal annotation to this page:
-breast cancer and HRT

Add your reflection on what you learned from this page and how it relates to your practice:
-breast cancer and HRT

Please let us know your feedback regarding the page:
-breast cancer and HRT